Home Food and Agriculture Food: A fragile right in a locked-down world

Queuing at the entrance of a supermarket in a wealthy neighborhood of Rome, shortage of food seems to be just a temporary consequence of panic buying. Across the globe, in the poorest areas of Europe or in the Global South where getting enough and nutritious food has never been taken for granted, the measures to contain the spread of COVID-19 are hampering the fulfillment of a basic human right: the right to food.

“In a context of existing structural inequality and discrimination, the current health emergency is leading the world to a food crisis,” FIAN International reports. The human rights organization has recently released a preliminary analysis of COVID-19’s impact on production of and access to food around the world, and of the actions taken by governments to mitigate it.

In Honduras, where FIAN collected reports of more than fifty protests, clashes broke out when the police wanted to prevent people from entering open air markets. “People were saying: ‘We are not gonna die of hunger, we need to enter here’ ….”, Sofia Monsalve, FIAN International Secretary General told Degrees of Latitude. “They were supposed to stay at home locked down…they are supposed to go to the supermarkets, but in a country like Honduras, going to a supermarket is a problem for many; not everyone can afford [it]”, she said.

Upheavals in Central America are not the only outcome of the efforts to control an unprecedented outbreak. The impact differs “between countries and within population groups, and according to the ability of authorities to respond to the crisis,” FIAN states.

The most vulnerable bear the greatest burden, including those depending on food banks. “Those food banks have been closed in many countries. [They] are run by volunteers who belong to the risk groups, [such as] the elderly…No one knows what the people who are dependent on those food banks are doing,” Monsalve stressed. Of particular concern are children who are not eating at school anymore, as well as street vendors and workers whose livelihoods are gained through informal employment. “In India there are already filed cases in court in order to ensure different sorts of schemes, to ensure access to food to these groups which have lost their livelihoods or their earnings,” she said. 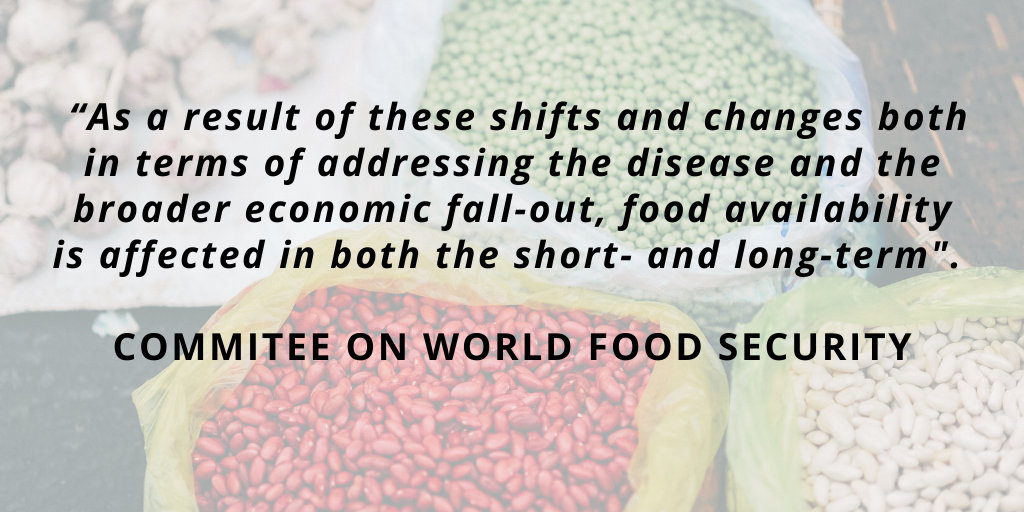 Among the most at risk of food insecurity, as well as of contracting the virus, are those living in refugee camps, in conflict zones, in informal settlements, and in the slums of countries like India or South Africa—where brute force has been applied in order to enforce the lock-down, according to FIAN: “These are very problematic situations because these people are against the wall, they don’t have anywhere to go, they don’t have a home in which they can stay,” she added.

Among the measures governments could implement, in addition to those designed to avoid speculation of food prices or to strengthen social security, is “to support much more than ever farmers, peasants, and small scale producers, because the reliance on the global food supply chains is very vulnerable. We don’t know what is going to happen in a couple of months. It is really a matter of crucial importance to support local production of food now,” Monsalve said.

Small-scale farmers’ production capacity is being affected by the closure of open air markets in many countries. Some of them are responding to the crisis with the so-called “community-supported agriculture.”

“The idea behind this is that a group of consumers come together and organize themselves to provide a farmer with the necessary capital to work the land and to produce. In turn, the farmer provides this community of consumers with a regular flow of products, vegetables, bread, and meat. This kind of scheme, which varies among countries, has spread across the world,” she explained.

The emergency is particularly challenging for fishermen and women who are facing the same problems as farmers or even worse, because they cannot always go fishing and sell their catch. “It is much more concerning because they are probably less organized in terms of alternatives, [with] schemes like community-supported agriculture,” Monsalve added.

The government of Argentina reached an agreement with small-scale producers to provide members of the population who are in need with an in-kind aid that includes food, especially fresh and vegetables, supplied locally. “It is not only providing cash; it is protecting the capacity of the local producers to continue producing, [while] fresh food is a very important item for nutrition and health of the people, ” Monsalve said. Supporting the existing capacity of small-scale farming is crucial in conflict zones where local production still exists and where international aid can be procured by small scale farmers in neighboring countries.

In other places production of food is being hampered by a lack of labor due to mobility restrictions, which shows how relevant migrant work is for the agricultural sector. According to FIAN, governments should support the workers in the field but avoid measures that exploit already marginalized groups, such as migrants. In Germany, for instance, the agriculture minister has suggested that asylum seekers could carry out the work, an option FIAN is questioning: “Their working conditions need to change because many of these migrant workers on Germany’s fields operate in very unsanitary conditions. Workers on plantations need very good access to water and very hygienic living facilities in order to prevent infection, and this is not ensured yet. Calling for protection of workers right at this moment is also very important, because in a pandemic they are now much more vulnerable,” Monsalve stressed.

In a global emergency, however, the right to food is not just a local matter. FIAN is calling on the Committee of World Food Security to convene an extraordinary session in order to start preparing a global response to a possible global food crisis.