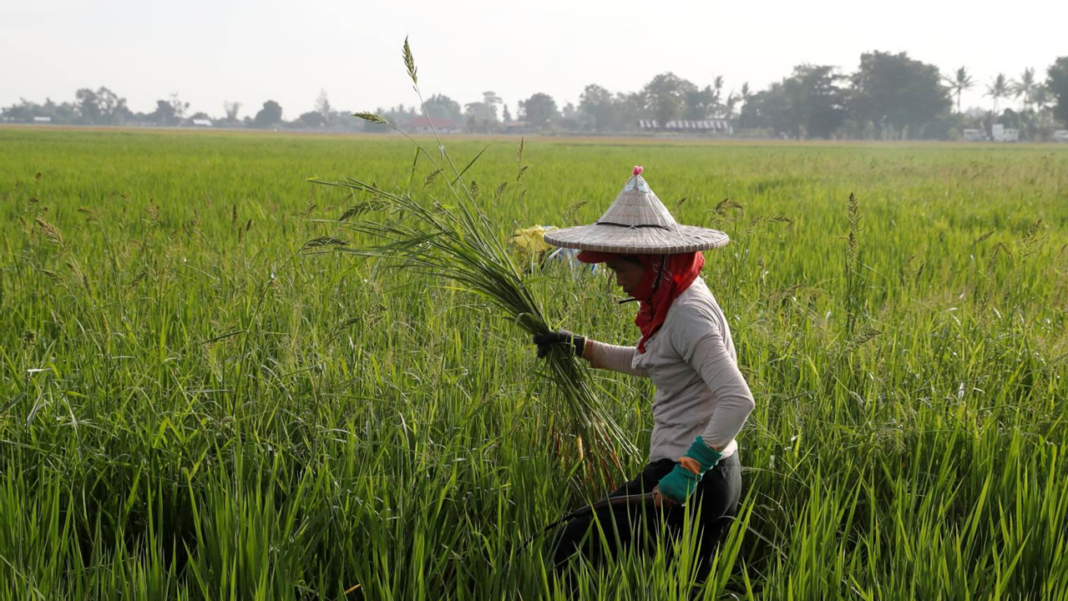 Landless farmers who produce rice for the landlords of big “haciendas” can’t get more than a little pocket money from their harsh work—not enough to provide diverse and healthy food for their families. Seasonal workers on sugar-cane plantations know that they can count on only six months of earnings. When summer arrives, those whose irrigation facilities have been destroyed by typhoons, or those who never had any, struggle while waiting for the rain.

That was the snapshot of agriculture in the Philippines when the COVID-19 outbreak hit the country. And it still is. The colonial past shaped a farming sector dominated by large export-oriented monocrop plantations; large plots devoted to agribusinesses, industrial plants, or housing subdivisions; and, still, 7 out of 10 farmers with no land, regardless of decades of attempts to enforce land reform.

“The agriculture in the Philippines is not actually ready for any pandemic,” said Kathryn Manga, community development worker and project officer at Kilusang Magbubukid ng Pilipinas, KMP, the Peasant Movement of the Philippines, founded in 1985 and supported by the Agroecology Fund. It has more than two million members, representing landless peasants, farmworkers, peasant women, and young farmers.

“Even before COVID, the agriculture in the Philippines was not sufficient to support its people… There was already a crisis, with prices of commodities, even vegetables and rice, that have gone up,” she told Degrees of Latitude.

Farmers have never stopped advocating and putting their lives at risk for “genuine land reform” as a prerequisite for the development of an agricultural model able to ensure food security: “The monocrop practice has really destroyed the ecosystems, the natural resources of our country. We would want Filipino farmers to enjoy a system where they would be able to decide what type of crops to plant. Something they can think of eating with their family,” Manga said.

What farmers grow is now mostly intended for sale, and diversity of production is rare. Manga told the story of those who cultivate rice, one of the most important staple commodities of the country: “When they sell their palay – the palay is the rice – for a low price, they go home with the little money they get … After selling their palay to the landlord … they have to go [back] to the market to buy rice.” Nothing remains for self-consumption because all the rice goes to pay land rents or inputs needed for production.

Farmers in the lockdown 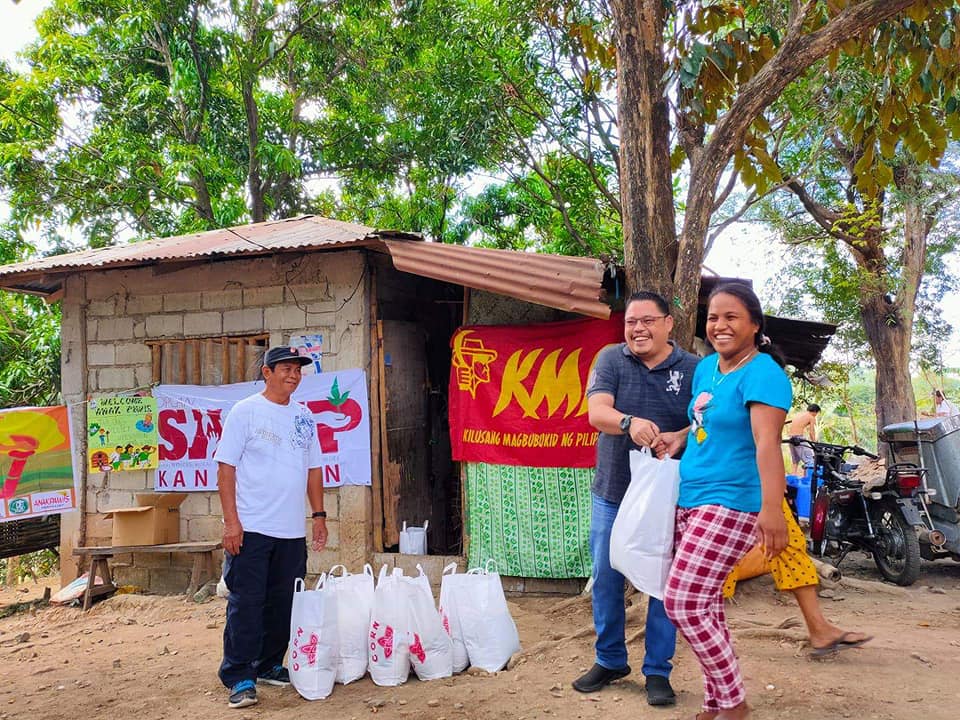 COVID-19 containment measures added “chaos” to an already fragile situation, according to Manga. The military and authorities controlled the movement of farmers, preventing them from tending farms and selling their produce. Volunteers who took part in relief operations to bring food to the most vulnerable were detained and charged with the accusation of violating the quarantine, six of them from KMP. However, small-scale agriculture is still proving its resilience in this emergency.

Lockdown “has really been very militaristic,” Manga said. “Check-points were placed in many different regions, [and] also in Metro Manila. … People were just told to stay at home. Without a job, they were not able to eat. For farmers it is very difficult … There’s really no work from home for them.”

Access to food has been an issue not only for rural poor but also for urban communities: “If the Philippines’ government will not really support agriculture, it will be difficult to have food security especially in urban areas, to access good and low-price vegetables in Metro Manila,” she said.

However, networks of farmers have been able to mobilize food even during the lockdown. From Bulacan—50 km north of Manila, where a past programme of KMP helped farmers to occupy unused land—come the vegetables that are feeding the most vulnerable in the city. “These are mostly for urban poor communities, for homeless people, for workers who are not able to go home to their provinces. It started with a Church organization that has a mobile kitchen and looked for a community of farmers who were producing vegetables.”

KNP, whose member organizations have been able to deliver ten thousand kilos of vegetables in the first month of operations, has also launched an online food shop whose profits support their relief activity. 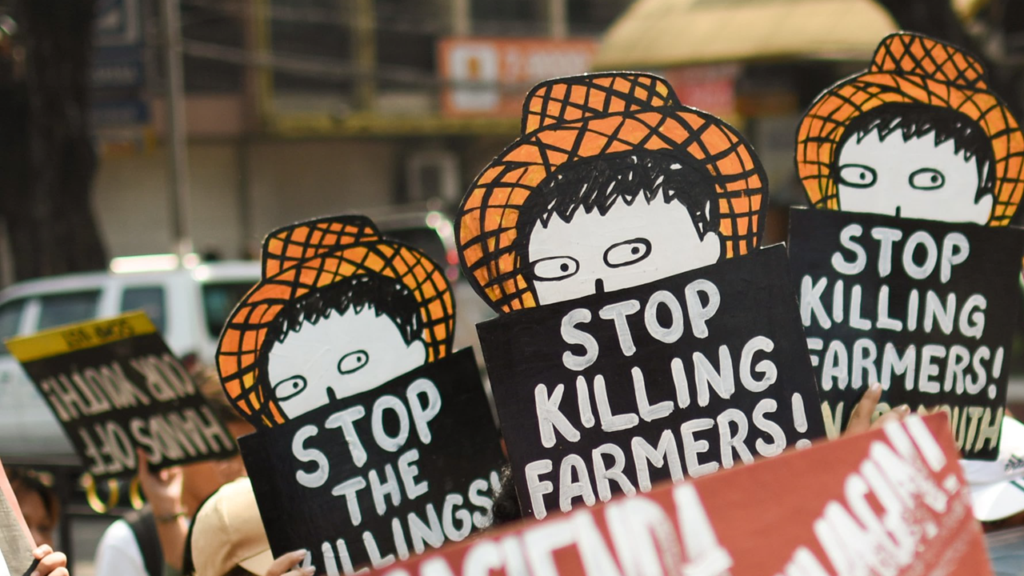 At the root of insecurity, however, is a century-long agricultural system based on extensive farming. It has been designed based on the export of high-value commodities like sugar, pineapple, and banana, as well as on production of rice.

Government, according to farmers organizations, has failed to address the crucial question of land distribution and is not providing the support that farmers need for production, including self-production of seeds or irrigation. “There is no production support for the Filipino farmers. There’s an irrigation bill that was passed two years ago, but until now it has not been given a budget by the government,” Manga said.

Farmers plant on land they rent and what they get is barely enough to pay for it. “They do not have the certificate of ownership.” That’s the point, she stressed. “[If] most of their produce has to be as payment, they won’t have extra for their own [consumption].”

“If you have a small plot that you can till, if you can grow a garden with vegetables, it would be easy. Many people [now live on what they] call ‘survival crops,’ crops that they do not really plant regularly, but they find around—root crops or vegetables which grow wild”.

Ownership of land means farmers can choose what to grow for themselves and for their communities in a model of agriculture based on diversification and sustainability. The agroecological model “will bring healthy food to Philippinos and the farmers,” Manga said.

Filipino farmers have practised agroecology for a long time, but monocrop and GMOs planting, according to Manga, has led to a decreased biodiversity and increased dependency on external inputs, including chemicals. Farmers are now trying to replant local seed varieties and are looking for diversification in the farm: “Those who are practising diversified farming still have rice, [but also] vegetables, root crops, fruit trees, and medicinal plants … which is also food for them. They have some animals ….”, she said.

Access to the market remains a major bottleneck: “Many of our farmers still need to go through the middlemen who buy the products at the very low price and then they transport to the nearby markets, in Metro Manila or in the region,” Manga explained. Middlemen, for instance, can pay 16 pesos for squash that will be sold on the market for 50 to 60 pesos each. When KMP offered to buy some farmers’ produce at a higher price, they expressed great concern: “It will make the middlemen angry and many of them will not go back to us,” they said. KMP is trying to overcome the problem by working with local organizations instead of individualfarmers.