Home Comments and Journalism Refugee journalists, the challenge of reporting from exile 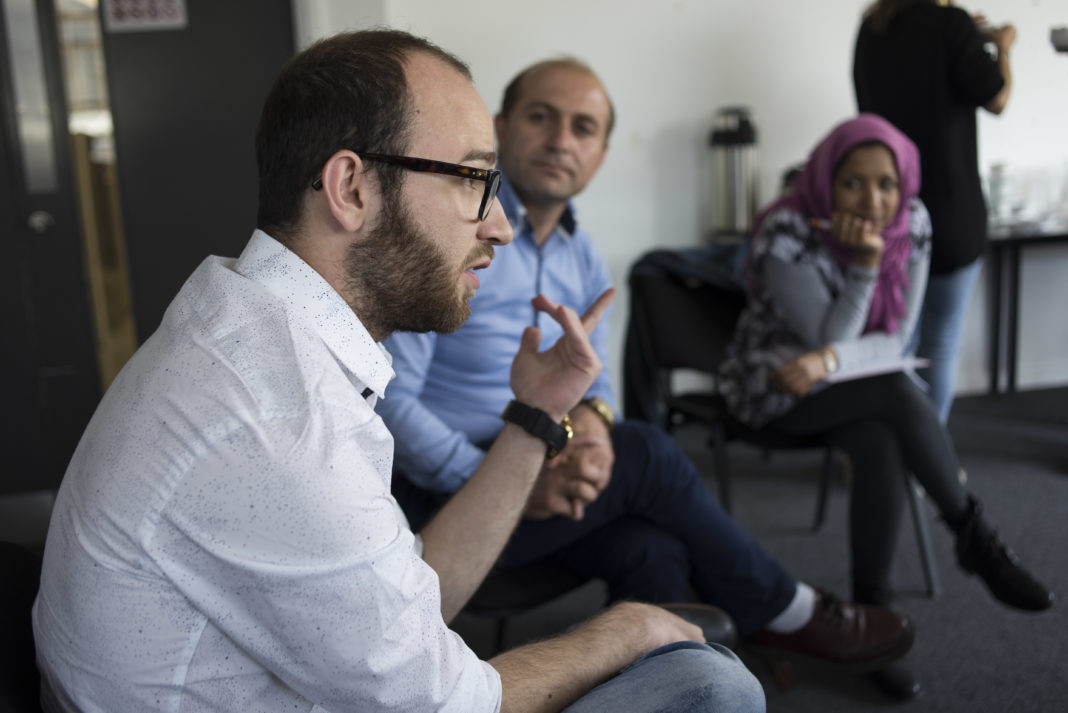 Abdulwahab Tahhan is a journalist and a refugee. From his exile in London, he documents the war that is devastating his homeland of Syria, monitoring airstrikes and assessing civilian casualties for the non-profit Airwars.

As for many journalists and netizens forced to leave their countries due to war, oppression, and persecution, continuing journalistic work has been a challenge for Tahhan. But now that’s his job: ‘Helping people understand the war better’, he told Degrees of Latitude.

Youngest of seven children, he grew up in Aleppo, studied English and literature, but not journalism, even if he would have liked. It was the concern of becoming used as a ‘propaganda tool’ that kept Tahhan away from professional reporting until the spring of 2011.

When the Syrian uprising erupted, he began translating content and videos about the demonstrations from Arabic to English for a secret Facebook group that spread updates beyond the Syrian borders, documenting arrests and detentions, and advising protesters how to keep themselves safe. ‘It wasn’t a professional platform; too dangerous to be identified as the journalist or the voice who was reporting about what was going on. Once you were identified, that’s it. You will be targeted; your family will be targeted …’, he said.

It was in Turkey, where Tahhan fled from Syria and obtained a visa to the United Kingdom, that his professional career in journalism begun, working as a fixer, interpreter, translator, writer and in the production of the award-winning documentary ‘The Suffering Grassers’. But getting a job in England was tough: ‘I had all the skills, I had the knowledge, the only thing that I lacked were the contacts’, he said. It was the Refugee Journalism Project, a collaboration between the London College of Communication and the Migrants Resource Centre, that provided Abdulwahab with what he needed to make his voice heard again.

It isn’t what you know, it’s who you know

‘In many countries, getting ahead in journalism still relies on having the right social capital, that is, being able to access jobs and opportunities by virtue of having an influential professional and personal network. The old adage still applies – it isn’t what you know, it’s who you know. So, if you are new to a country, don’t speak the same language, aren’t the same colour or religion, don’t have knowledge of the system, you simply don’t have the same social capital as the journalists who came through the European system. The project’s activities (mentoring, workshops and industry placements) attempt to address this’, Vivienne Francis, Project media consultant, explained.

The Project – which so far has worked with 36 journalists from a number of countries, including Syria, Sudan, Eritrea, Afghanistan, Iraq, Iran, Cuba, Pakistan, Bangladesh and the Yemen – was originally a London-focused initiative, but it has received applications from all across the UK, and ‘in greater numbers than we anticipated’, according to Francis. ‘We did not want to turn anyone away, as a number of these individuals – due to the UK government’s refugee dispersal scheme – were living in communities where they felt quite isolated. We had to find practical ways to support not just more participants, but also those who lived many miles away. One solution was to offer online mentoring and connecting them with networks of journalists closer to where they lived’, she said.

The value of a different perspective

Refugee journalists need support, but they bring to the newsrooms the invaluable knowledge of the countries they come from. ‘That’s one of the ways we could improve journalism’, Tahhan said. ‘If you want to write a story about Syria, you want a Syrian researcher, someone who understands Arabic, who understands the culture, who knows places and locations, that can tell you something about the country that maybe people here don’t know or are not aware of, that can double-check the authentication of specific reports’, he said.

It is not about teaching the local journalists how to do their job better; it is about providing them with sources, insights and different perspectives. He was intrigued, and alarmed, noticing how much attention European journalists put on bombings and terrorists killed, compared to ‘the victims of those bombings’, Tahhan said. ‘I would always focus on the humanitarian aspect; I would always focus on the civilian casualties from the war … I haven’t seen this very much on the news, to be honest. I haven’t seen a lot of reports from a civilian perspective’, he added.

But to unlock the potential of refugee journalists, many barriers have to be overcome and a holistic approach is needed: ‘The asylum process itself also takes a huge toll on individuals. Before they can think about re-establishing their professional careers, many have to deal with the emotional anguish of leaving home and loved ones, battling to get refugee status, permanent housing, and access to benefits’, Francis said. Giving refugees the basic tools for survival is not enough to enhance integration. The question is how to ‘maximize the value of the professions, work experience and qualifications they might already have. Their prior lives and experiences need to be seen as adding value to society’.

What is crucial, according to Tahhan, is to provide journalists with contacts and a ‘safe’ platform: ‘A safe environment is where you can start discussion ideas without being accused of being biased, discussing the ideas for the ideas themselves without attacking you personally …. [discussing] the ideas, [without] discussing the person, throwing accusation, stereotyping people, generalizing. Being safe [means] that you have been able to express whatever you want to express without being prosecuted’, he explained.

Refugees journalists must feel safe. ‘I know this is highly unlikely to happen in the Europe because of the freedom of speech, freedom of the press, but bear in mind we come from countries where we are oppressed and we can’t really report a lot of things against the governments, against the regimes’.