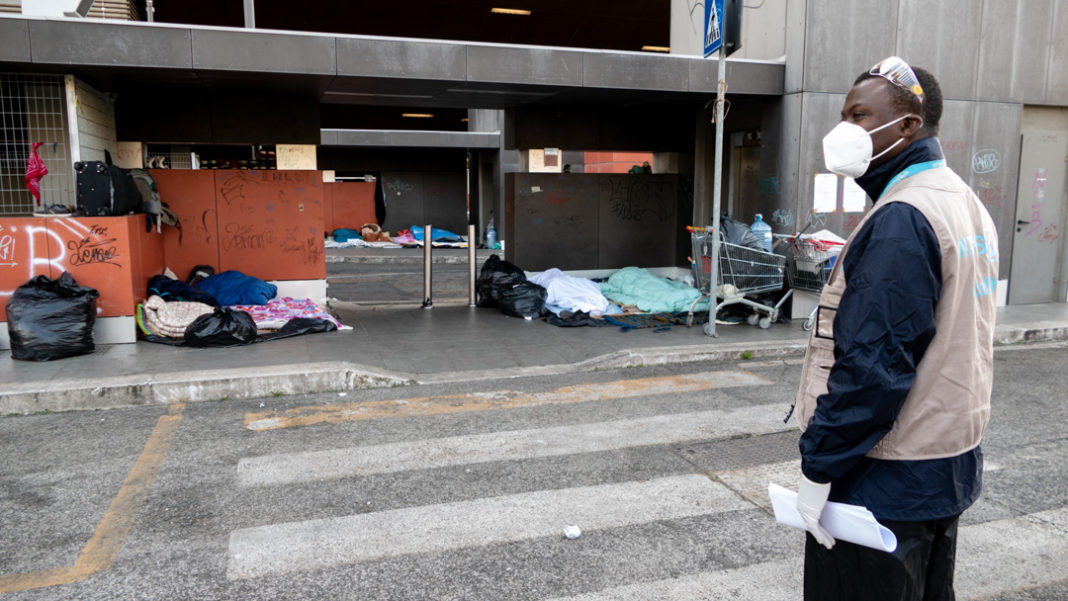 Behind the Tiburtina Station, in the East of Rome, with just a small covered area protecting from the inclemency of the weather, sleeping close to each other is the only way to stay warm. A boy of Ivorian origin is alone, far from everyone, in the centre of the sidewalk, exposed to a freezing wind.

‘He told me he preferred to die of cold than to get infected, because he was very scared and he knew that it was not safe for him to be close to the others’, Dr. Antonella Torchiaro told Degrees of Latitude. She is a physician of the NGO Intersos, one of the few organisations carrying out prevention activity, medical examinations and screening of COVID-19 symptoms among those who do not have a secure roof over their head in the Italian capital.

An estimated eight thousand people are homeless in Rome; between fourteen and sixteen thousand, if the figure includes those who call ‘home’ an inadequate housing or who live in such extreme exclusion that their living conditions are comparable to those who are homeless.

About two hundred and fifty persons crowd the area of Tiburtina, where social distancing is hard, if not impossible, because the sheltered space is narrow. Among the most vulnerable population, there are also those who live in the squatted houses, mostly in the East of the city, and at the Termini station, in the centre.

They are migrants and Italians fearing not only the disease but the future, living without hand sanitiser, access to water, having lost their jobs, with few chances of getting what they need to survive.

Since April 1st, Intersos has deployed two social health teams in the field because the demands are so high: In just three weeks, the first mobile medical unit reached 610 people and performed 255 medical examinations. What is being protected, however, is not only the individual health but also the collective one: ‘It is as if this epidemic reveals [….] that the public health is made up of many rings and the people who live in a condition of fragility or social marginality are fundamental links in the chain. Excluding them means undermining everyone else’s health, the community. It is as if this moment reminded us how important it is to start from the most fragile ring to ensure the tightness of the entire system’, shared Torchiaro, who is also the medical coordinator of the clinic of Intersos24, a project which includes a primary care centre the Italian NGO has set up in Torre Spaccata, on the outskirts of Rome. It provides protection and support to unaccompanied minors, women who are victims of violence and exploitation, as well as young adults who are out of the national reception systems and are living in conditions of vulnerability. 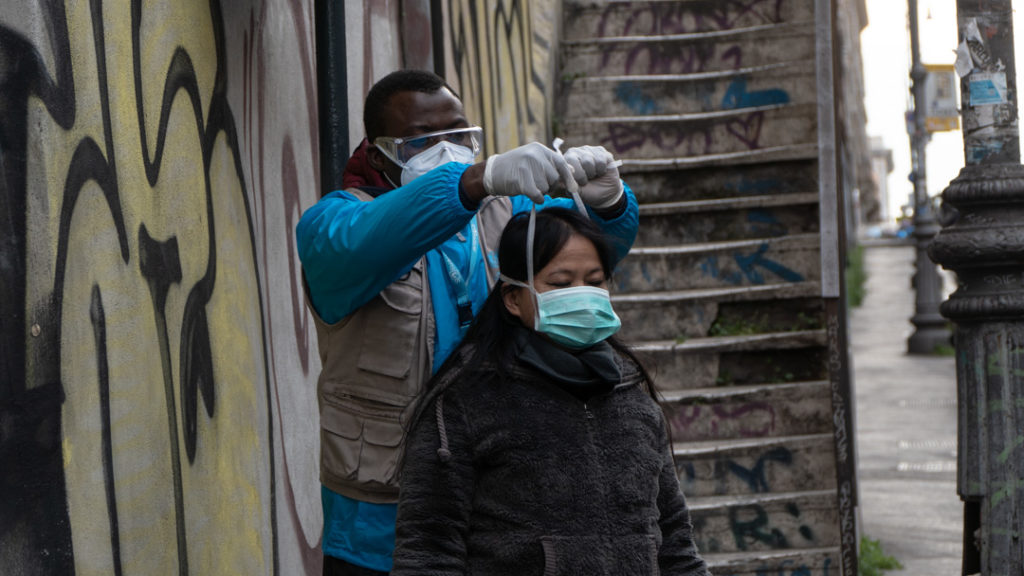 Those met by Intersos’s physicians and cultural mediators behind Tiburtina Station are mostly migrants. They are waiting for the regularisation of their residence permit, sometimes they are passing through just to get their documents between one seasonal job and another in the agricultural areas of Foggia, Calabria or Northern Italy; or they are new adults expelled from the Italian reception system, employed under the table at car washes, restaurants or as unloaders. ‘It remains a place of transit for people who are temporarily homeless, for migrants in conditions of extreme social unease, exposed to labor exploitation’, Torchiaro said.

The work, even the illegal work, is no longer there, and those men and women, the unseen ghosts of the emergency, cannot imagine a future. Torchiaro observes, ‘At the moment everything is halted, so they are living suspended lives, lives that were already suspended as they waited for a residence permit or for an improvement to their conditions’.

The same is happening at Termini, where chronically homeless Italians and migrants, who get their living from handouts or from charities, find a shelter and where the inhabitants of the large buildings around Piazza Vittorio Emanuele gravitate. Those are the most fragile from the Chinese and Bengali communities, and being poorly integrated, they do not have easy access to the information necessary to protect themselves from the virus.

In the squatted houses, more information is being circulated among the better organised groups. Coming from the experience of the political struggle, these groups are more aware of what is happening and how to prevent the spread of the disease. ‘But they live with a double fear: [becoming ill] and losing their homes. Getting sick would mean leaving the house, jeopardising their squatting rights. It is the fear of losing the little they have’, Torchiaro stressed. As for the women assisted by Intersos: many are caregivers without a contract, some of which probably continue working without being able to protect themselves and without being entitled to paid leave should they contract the disease.

However, those who are on the streets experience the greatest despair, like the Afghan boy met by Torchiaro, homeless after finding and then losing a job. He carries the trauma of someone who comes from a wartorn country: ‘He suffers from panic attacks; he told me of the worsening of symptoms and insomnia. He told me he already had problems due to his past, his experience. And then the street, the difficulty of sleeping on the street. He told me: “Every evening, when I think I won’t be able to shelter myself from the cold, panic attacks come and now this fear of dying and not being able to do anything to protect myself is tormenting me”’.

People lacking the most important personal protective equipment — a home — feel more and more isolated: ‘​In Termini, those who usually have oppositional behaviour are increasing. They are even more agitated and nervous; they feel their impotence quadrupled compared to normal conditions’. They often only manage to eat a single meal every day, most of the time just lunch, in the few soup kitchens left open or thanks to food distributions. ‘Moving around in Rome is now much more complex, especially for people who are afraid of being stopped by the police … This means the struggle to survive is increasing’, Torchiaro explained.

Fighting the virus among the most vulnerable 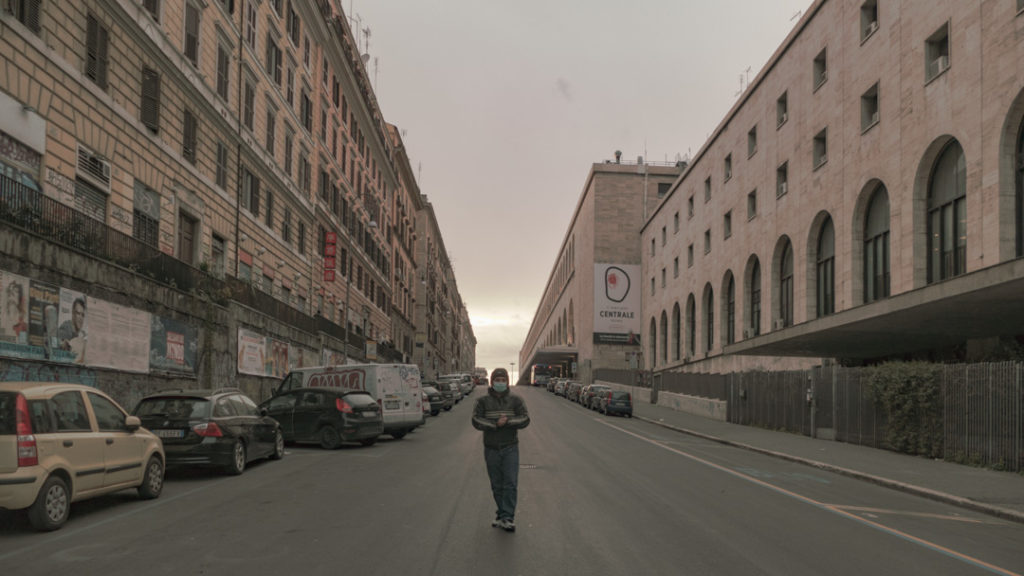 Prevention in the context of such fragility is particularly hard. In the stations, homeless people live in crowded spaces and have no way to bathe or wash hands: ‘We are distributing toilet kits, but they are not enough; alcoholic gel, wet wipes and surgical masks’. It is also difficult to make a differential diagnosis, that is to distinguish between COVID-19 and the normal flu because those who live on the streets not only run a greater risk of contracting the coronavirus and of not reaching the health services in time — ‘with risks for individual health and collective’ — but they are also much more exposed to other types of diseases. ‘That is one of the main expressions of inequalities in health. The possibility of protecting [the homeless] from common environmental factors would certainly simplify a possible early diagnosis’, Torchiaro added.

Many of them have previous diseases or chronic conditions, from hypertension to diabetes, from broncho pneumopathies to oncological pathologies. Often they know about the pandemic and the main prevention measures, but ‘we often find very fragile people — those with discomfort or mental difficulties, very old, who do not speak the language well, who are more isolated or do not have a community of reference — bewildered, frightened because they have the perception that we are certainly in an exceptional moment, but then, in the individual conversation, the lack of information comes out’.

Most of them want to be examined by Intersos’s doctors because they are scared. Only at the beginning of oIntersos’s activity, Torchiaro said, was there some distrust because after the Decree of 9 March imposing the lockdown, many nonprofit organisations have slowed down their activities in order to adapt to the new conditions and the areas of fragility in the city have been left to their own devices. Intersos itself had to change its way of working, closing the centre of Torre Spaccata and finding accommodation for its guests, asking for permits to operate and implementing new procedures ranging from individual protections to the daily sanitisation of uniforms and means of transport.

An extremely complex and time-consuming job, although the most demanding aspect, according to Torchiaro, is not so much the assistance to the people as the making sure that ‘the needs of those we meet’ get a concrete institutional response because the public institutions are currently struggling.

The opening of reception and active surveillance centres for the homeless is crucial: the Plan of the Municipality of Rome foresees the opening of 24H facilities for approximately 450 persons, but just 240 for the whole day. Pending this, Intersos is calling for the government to provide what is essential, water: ‘Awaiting the opening of the centres, which are the most urgent thing, strengthening or reopening the facilities dedicated to the personal hygiene of the homeless or [installing] chemical toilets [is fundamental]’.

‘The reality is that there is still no access to those centres, and in any case, they will not be enough.’

On March 19, however, Intersos signed an agreement with the Municipality of Rome to transfer people in particularly vulnerable conditions into a dedicated structure.