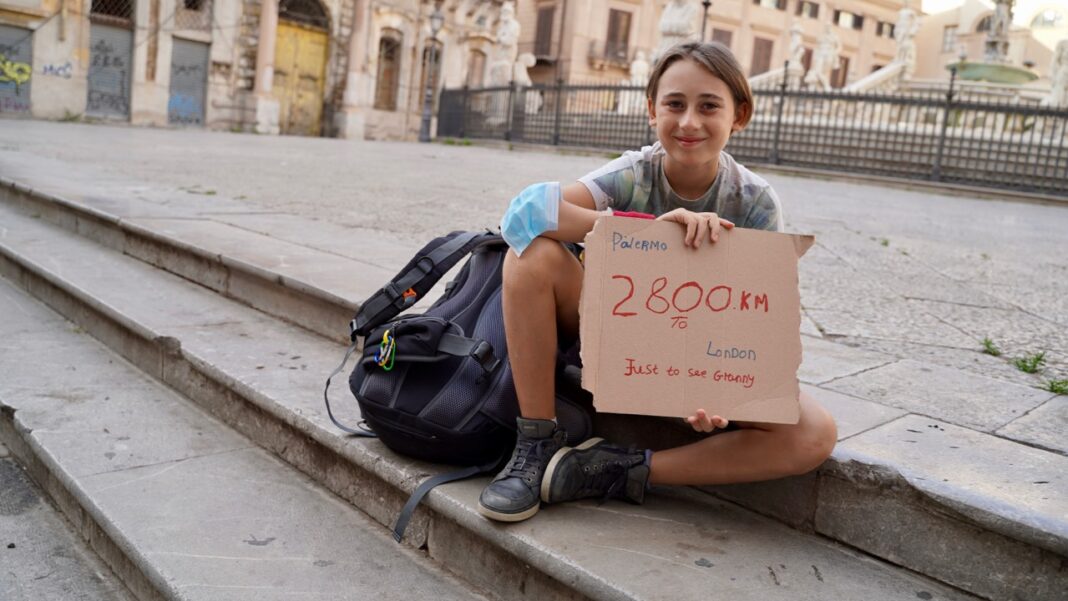 One step, then another, and another again, despite the heat, cold, fatigue, and sleepiness. So many little steps for just one hug.

It takes a lot of courage, but it takes just one hug for the whole world to take a step forward.

Romeo Cox, ten years old, has taken many steps along the 2800 km that separate the city of Palermo, in Italy, from London. In that long walk, he crossed paths with other boys, with men and women who had come from far away, some because they were forced to flee. And he led a crowd of donors to take just as many little steps, supporting the project of the nonprofit REACT (Refugee Education Across Conflict Trust), which is designed to provide the most fragile boys of Palermo with the necessary tools to engage in remote learning.

But everything was born out of love for a grandmother.

Romeo lives in Sicily with his Italian mom and English dad. During the months spent in lockdown, he secretly planned the journey that would take him across the Channel, without a plane or train, to embrace Grandma Rosemary again. “I remember very well, I was watching YouTube and I thought: If I can walk to the store [nearby], I can walk 2800 km,” Romeo told us.

Persuading his parents was the first test of his determination. Romeo used every weapon at his disposal. “I convinced them by asking them many times: every morning, at every lunch, every evening. Every time I saw them, the first question [was]: ‘Mom, can we take this trip? Dad, can we take this trip?’ When they told me to do something, I did it, even if it was homework and it was time to play video games … After fifty times they said yes”.

Fear and a desire to have fun, but also to inspire – it was with these feelings that Romeo set off, taking his dad with him, on a Thursday at the end of June. “[The day before leaving], I felt like I was dreaming about it, not doing it [this trip]. [As if it were not real]. At dinner, I moved my leg. I was scared, happy, nervous”.

On foot, by sailing ship, by bicycle, or with the help of a donkey, without fossil fuels that “hurt the planet”: “I wanted to show that our body is used to walking, it was conceived to walk, to create, to be creative”.

They walked from Sicily, along the Italian peninsula, where abandoned houses and garbage often mark the landscape. Their path cut across the countryside, mountains, urban suburbs, and historic centers – a diversity of landscapes that resembles the diversity of human beings: “[Passing through these places], I thought that I am a ‘superhuman’ who lives in nature and in the city. I am half made of nature, so I imagine that my body on the right side is full of leaves, trees; while on the left, I see houses, the floor, garbage, cars. And in the middle, the brain, which contains these two parts; that’s very difficult”.

Reconciling nature and city, urban or industrial development and respecting the environment, is not an easy task. Romeo noticed this as he stopped in the big cities, with their cars and smog that make nature and man sick. “A field full of wheat … it’s wheat that you eat, like bread and cookies … and the smog becomes clouds and [has an effect on the environment]”. 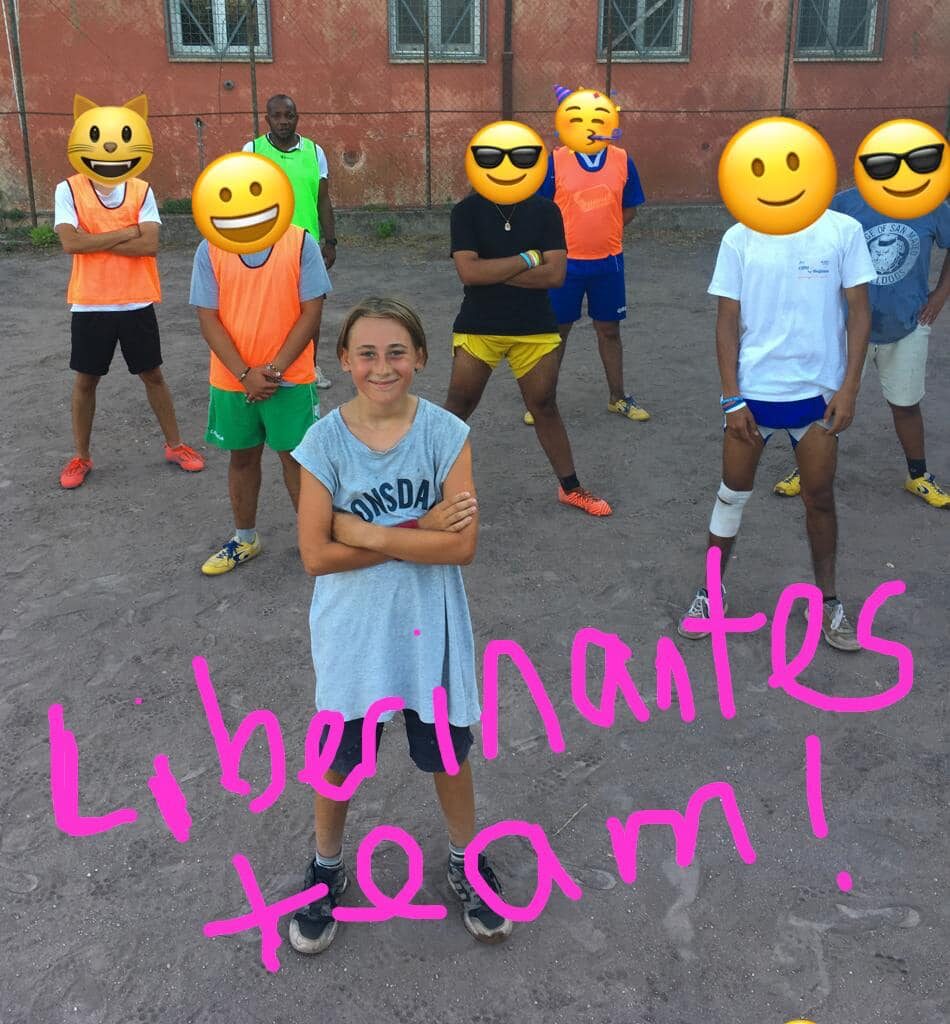 The route that Romeo chose followed many stretches of the Via Francigena – a route that pilgrims travelled for centuries. Along this path, the life of the young Anglo-Italian man intertwined with many other lives – “new people” to understand.

Romeo stopped in Naples, where he played with other kids in the squares and walked the alleys of the ancient heart of the city. He was surprised because the Neapolitan center is not a ” metropolis” full of traffic, with the big chain stores that he envisioned. It resembles Palermo, with its “beautiful” backstreets reminiscent of those of Ballarò, the neighborhood where he lives, and “magnificent, but abandoned places”. In both cities, people speak in a dialect and children, like him, play in the streets.

“[The different things I see] make me think that the world is full of cultures and traditions … I remember a small town: We went into a bar, [and] there was practically nothing there except a sandwich or something like that. We asked the gentleman [in the bar]: ‘Where is everything?’ ‘There’s nothing here, apart from our tradition,’ [he answered]”.

Breaking barriers and building bridges is not always easy. Romeo makes friends immediately and yet sometimes diversity requires special care: “When you meet someone who is a little different from what you think … If he doesn’t look at you, he doesn’t talk much, you can chat with him about something [he loves]. If he likes Lego, for example, you talk to him about it … I’m looking for what he likes … You must always act as if you were the guest and he is the master of the house. You must go towards the other”.

Football is Romeo’s great passion. Wherever there is a ball, there is an immediate bond: “[I played] in Messina, Agropoli, Salerno, Naples, Rome … Football helps you to make friends, it helps your body, you run a lot, you sweat and it does you good”.

In Rome, Romeo played on a football field where those who were trying to score were boys who had made a very long journey, too. Theirs was a forced journey, as they fled wars, hunger, and poverty – alone.

At the Città dei Ragazzi, a real city that hosts fragile minors and creates paths of social integration, the association Liberi Nantes trains a group of young athletes, migrants, and refugees: Batman, who traveled 800 km from Albania at the age of ten; Ronaldo, 2150 km from Egypt, like Salah, who spent a year on the road, and Balou; Ibrahimovic and Panda, also from Albania; and Ramos, 1300 km from Tunisia. Made-up names, those of their own heros, Romeo writes on his Facebook page, to conceal the identity of boys who look forward but are far from home.

Romeo is not the only one who has made such a long journey: “It is made by the invisible, those to whom no one pays attention, those who travel across more than 2800 km by boat to get to a place where there is no war, where there is freedom, or where there are not so many difficulties because of poverty…”.

“As I walk, I always imagine [seeing] the feet, the feet of those who have walked in a journey like mine. I imagine the people who are walking without anything, without backpacks, without water. Nothing, even barefoot”.

The choice to raise funds (over 18.000 pounds right now) to buy tablets, books, and tools for kids like him – Sicilians and migrants who, during the lockdown, did not have the means to study online – is, once again, a choice rooted in hugs and affection. When Romeo moved to Sicily from England, it was his friendship with a child from Ghana that helped him settle into a new country and communicate in a new language. “When I came to Palermo, I couldn’t say a word, but he, who speaks a little English, helped me a lot with Italian … He is a friend; we have exchanged many things and we have been together since the first time I saw him”.

The stories of those who risk their lives at sea come to Romeo from the streets of Palermo, but also from the “television” that tells of men and women “in wooden or plastic boats” who seek freedom, but sometimes reach only other inhospitable lands – caged in places that seem to be “prisons” or forced to seek ways to survive “in other regions where it is very dangerous, doing dangerous or toxic jobs that are harmful”.

Romeo has seen a lot of humanity during this journey. People walking on the highway, in Campania, [for instance]. “They were not like us. They walked to go to work or back home, or to do shopping. Their shoes were ruined, you could see the feet. It really affected me. I felt a little sad”.

“[People walk] for simple reasons, to go home, to go to sleep. And I thought: And the bicycle? And the car? Perhaps they do not have the money to buy those things”. 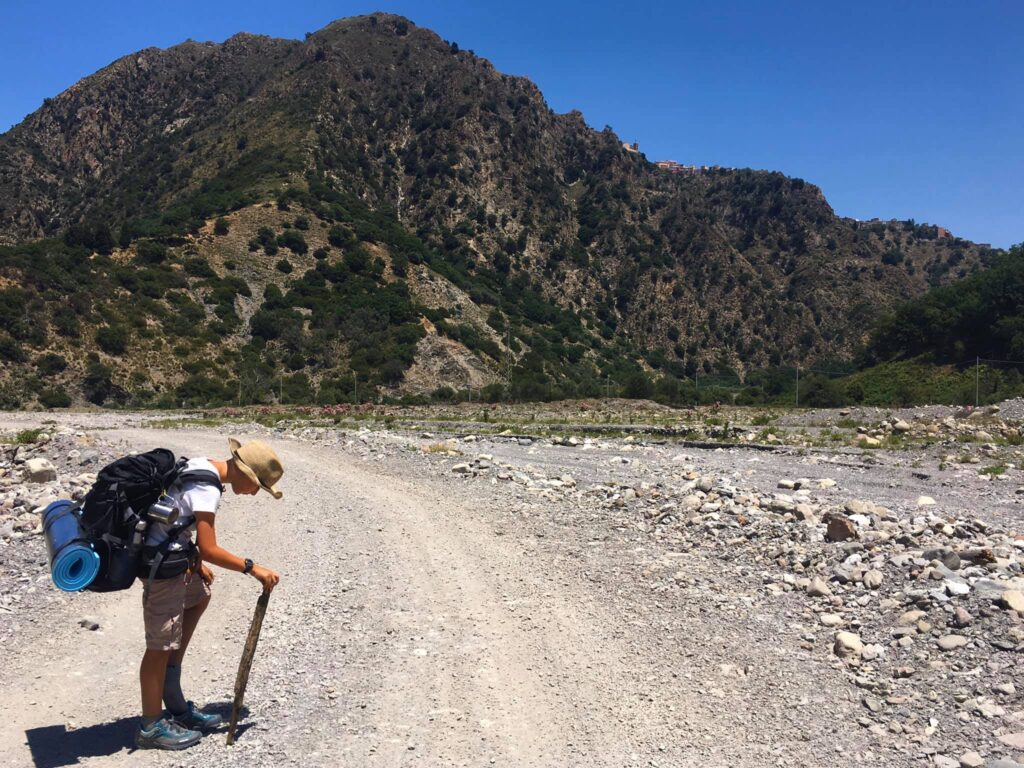 With all who walk, Romeo shared his fatigue. Getting up early, at 4 a.m.; walking in the heat; seeking hospitality in churches, convents, friends’ homes; fighting fatigue, with the sun beating down in summer and a backpack “weighing almost more than me”. And then paying attention to a thousand things, to the rules imposed by Covid, to the road when you ride a bike or when you happen to meet a pack of stray dogs, so as not to “waste your life, which gives you a chance”.

“How can I go on [when I am tired or thirsty]? We find ourselves a tree or some shade, the most important thing. Then, my father and I always bring bottles, even small bottles, Fanta gives us some energy. We always have to drink water, sit down for at least ten or five minutes, and then we start over…”.

On his journey from an island in the Mediterranean Sea to one in the North Sea, Romeo thought that he would miss the water that his city overlooks: “I thought I would always miss the sea because I would walk like crazy. But as I walked, I didn’t notice it; we were always on the coast, so we could go to the sea whenever we wanted”.

The road teaches a person that you can’t overcome difficulties if you are alone, that you have to “always help each other”, as Romeo and his father did. “Sometimes I think about myself, and it’s a bit difficult. [Here], I have learned to think of others as well”. Even with others, you can get lost.

“Getting lost is part of the journey. If you don’t get lost … it means you haven’t actually made a journey”.